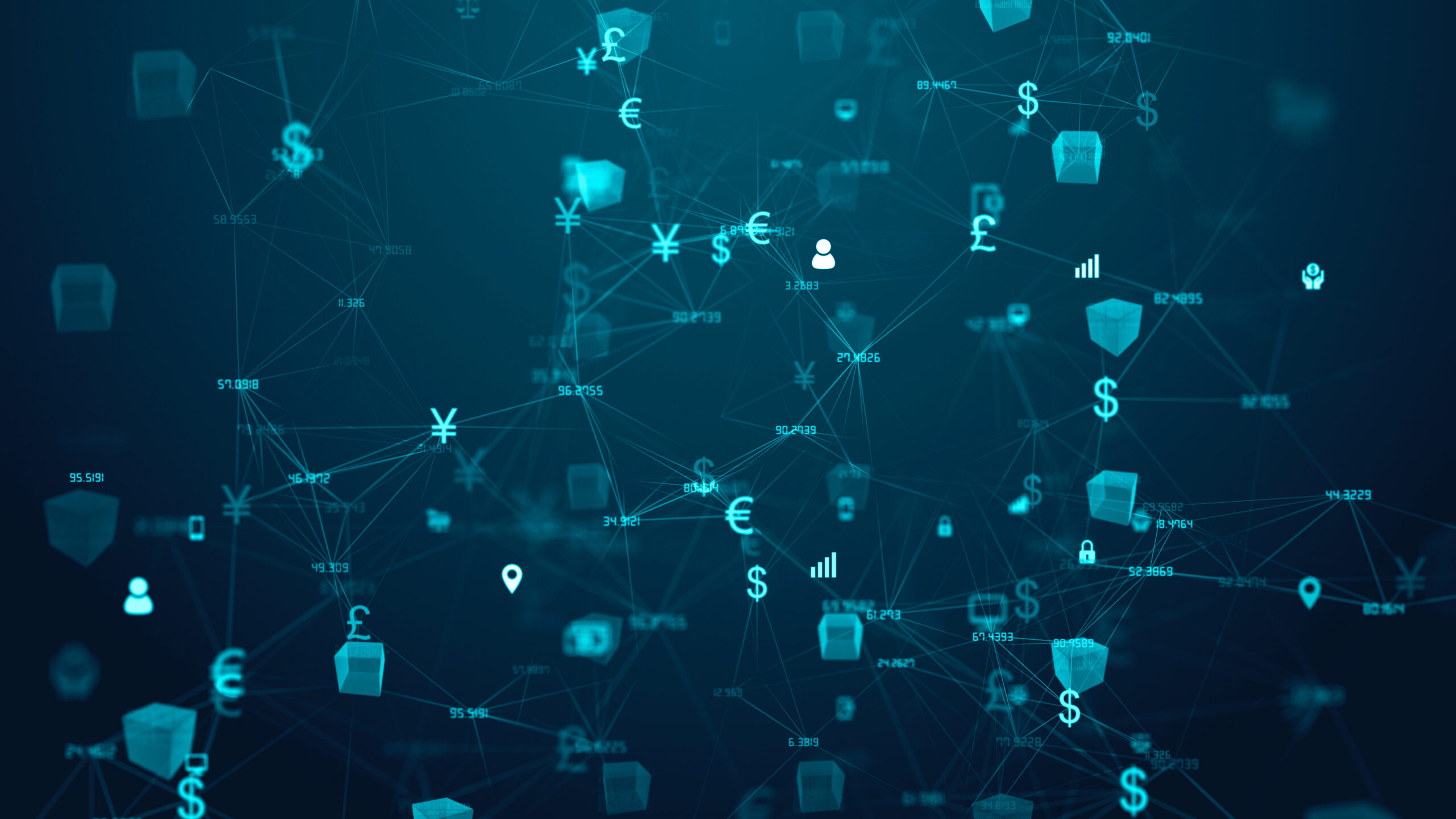 It has been quite a hectic time in crypto.

For those of you who have already read about the collapse of FTX, or those who are wondering how DeFi can be more prone to theft after the FTX collapse, feel free to skip to the section titled “What I’ve learned from this.” For readers who haven’t heard the full FTX story, I’ll provide a brief summary of recent events. Note that many of the details of this story have yet to be confirmed, since facts are still emerging, and much of the existing narrative is based on anonymous sources and anecdotes rather than court filings. I’ll do my best to summarize events, but keep in mind that parts of the story below are likely incomplete or even wrong.

Prior to its collapse, FTX was at one point the third largest trading exchange in the world. In the crypto collapse of 2022, CEO Sam Bankman Fried (SBF) appeared to be one of the most stable remaining players in the industry, acquiring one struggling company after another.

A very small subset of industry watchers had sounded alarm bells in the previous months, but few took these rumors seriously until November 2nd, when CoinDesk published an article about FTX’s market maker and SBF’s personal hedge fund, Alameda Research. The article, based on a leaked spreadsheet of Alameda’s financials, showed the hedge fund had accrued at least 8 billion dollars of liabilities. Its assets largely consisted of illiquid holdings, including $5.8 billion of FTT, FTX’s proprietary exchange token. The article showed over $2 billion of FTT were pledged as collateral for various loans.

Alameda had long been the largest customer of FTX, which suggested the exchange was likely the holder of a large amount of debt, collateralized by FTT, its proprietary token[1]. If that was true, FTX might be unable to pay back depositors if its token price dropped. In fact, it might be unable to do so regardless because Alameda owned 180% of the circulating supply of FTT. If FTX was indeed Alameda’s chief financier, there was no way to liquidate the collateral without crashing the price.

In the following days, speculation mounted that Alameda Research might be insolvent. Dirty Bubble Media published a long exposition suggesting that wash trading accounted for a large fraction of the market for FTT, meaning that the true value of the token was likely far lower than its current price implied. If the token’s price dropped too far, Alameda might face a margin call on collateralized loans. 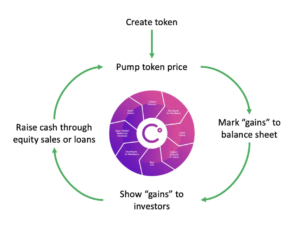 And the price was already dropping. It had been on a slow downward slope since early August. On November 6th, the CEO of Binance Changpeng Zhao (or CZ for short), announced on Twitter that the company would sell all of their $500 million of FTT due to “recent revelations that have come to light.” Given the tweet’s allusions to the Terra/Luna collapse, many people believed CZ had inside information showing FTX was insolvent, and planned to sell his FTT before the price collapsed.

So customers began withdrawing money and selling FTT, leading to a price drop of 75% in two days, even as Alameda bought hundreds of millions of dollars of the token in a failed effort to stabilize its price. By early on Tuesday, FTX had halted withdrawals due to a “liquidity crunch.” It appeared that earlier statements made by the CEO that “FTX has enough to cover all client holdings” were very much incorrect.

By the morning of the 8th, SBF announced on Twitter that he had reached a non-binding acquisition deal with CZ of Binance. After taking a look at FTX’s balance sheets, Binance announced on November 9th that they would not follow through with the earlier offer.

On November 10th, SBF publicly apologized on Twitter, stating that he did not realize how highly leveraged some FTX users were. I remain skeptical of this claim. One does not simply loan over half of user assets to one’s own hedge fund because of “poor internal labeling.”

On the 11th, FTX officially filed for chapter 11 bankruptcy protection. In the afternoon, The Wall Street journal reported that Alameda owed FTX $10 billion and that the exchange was missing $8 billion of customer deposits due to these secret loans. 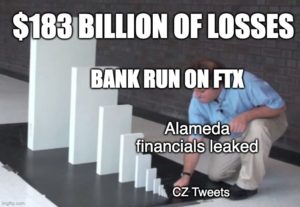 What happened to user deposits?

Assuming the story above is correct in its general outline, the biggest remaining question is what happened to user deposits? SBF owned a majority stake in Alameda Research, so it stands to reason that if they held liquidity sufficient to cover user deposits, SBF would have demanded they return the money. So, they must have either lost the funds that were lent to them, or they locked them up in illiquid assets like private securities.

Here we can only speculate. The blog MilkyEggs has an interesting breakdown of a few theories supported by anecdotes from Twitter posts from FTX employees and other articles. In my mind, the most plausible explanation is that Alameda’s early trading edge, which existed largely as an artifact of the early, inefficient crypto markets, evaporated some time in early 2021. In an attempt to maintain their prior levels of profitability, the hedge fund placed leveraged long bets on the market, which did extraordinarily well for the better part of a year before completely tanking when the market crashed in 2022. At some point in this process, FTX lent customer funds to Alameda to keep them solvent in the face of margin calls, or to recapitalize them in the hopes they could make it all back. Instead they lost even more.

The other remaining mystery is why SBF chose to lend out customer assets to Alameda. He must have known that FTT’s price was inflated and that the collateral Alameda provided could not be liquidated in the event of default. Sam had an interesting conversation with Vox Reporter Kelsey Piper over Twitter DMs on November 15th. During the conversation, he gave the following explanation: 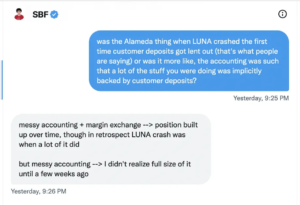 If the spreadsheet sent to investors is anything to judge by, internal accounting at FTX was very, very sloppy.

In the aftermath of the bank run and bankruptcy of FTX, several other exchanges have been forced to halt withdrawals. Other exchanges and lending platforms such as BlockFi, Genesis Global, Gemini, Liquid Global, Crypto.com and others have all fully or partially suspended withdrawals following FTX’s collapse.

Some, such as Crypto.com, have only suspended withdrawals of a few tokens. Others, such as BlockFi, appear to be preparing for bankruptcy. With the US federal reserve continuing to raise interest rates, crypto as an asset class has continued to fall. Only time will tell how far the contagion spreads, and what the ultimate fallout will be.

What I’ve learned from this

One of the most dominant themes I’ve seen emerge in the aftermath of the FTX collapse is that of the superiority of DeFi over centralized exchanges. You can find these comments on Twitter under almost any thread discussing recent events.

FTX failed because it was regulated by governments not by code.

DeFi didn’t fail because it was already regulated by code.

I just withdrew all my funds off https://t.co/hKkLMzo7Sl. I don’t necessarily think anything is wrong with @cryptocom… but if you haven’t learned the importance of self-custody by now then there may be no hope for you.

Not your keys, not your crypto

No better time to see the utmost value of self custody.
“Not your keys, not your funds” suddenly has a new meaning.

It’s very easy to promote DeFi as the solution to theft of customer assets via centralized exchanges. But if you actually take a look at the numbers, users are still more likely to lose funds through DeFi than centralized exchanges if you control for transaction volumes. 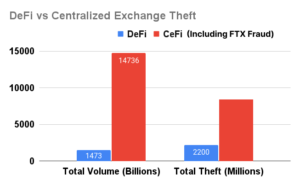 Data source: DeFi, CeFi, Theft (Page 6), and FTX amount owed to customers. Note that the non-FTX data is for 2021, since full-year data for 2022 is not yet available.

If we assume that theft remains a constant percentage of volume, moving more transactions to DeFi would actually make the problem WORSE. It is going to take time and a lot of hard work to improve DeFi security and usability enough for it to be a true alternative to centralized exchanges.

Scarcity alone does not create value

I think this collapse is a good time to bring up a more fundamental issue I see with the blockchain ecosystem: people are too focused on speculative assets with no intrinsic value.

I’ve been banging on for years about how speculative tokens do not facilitate any real value creation. Too many people in crypto are too focused on lines going up and down rather than the underlying value those lines are supposed to represent. This is an easy mistake to make when crypto is mooning and everyone is “getting rich.” But pumping up the value of an invented asset does not create any real wealth. And as we’ve seen with Alameda, borrowing against those invented valuations can lead to real wealth destruction.

When the lights go dark at FTX headquarters and the last of the lawsuits have been litigated, what value will it have created? The exchange’s entire business model was premised on facilitating the negative-sum exchange of tokens. It’s easy to create a new token and trade it back and forth with other holders, inflating its value to unbelievable highs. Sometimes you can even attract outside investors who will give you real money for it.

It’s much harder and more important to create value in the real world. At the height of the 2017 crypto bubble, Vitalik Buterin wrote on Twitter that we should measure progress not in terms of market cap or token price, but in metrics like “unbanked people banked,” “censorship-resistant commerce,” and “Venezuelans protected from hyperinflation.” I agree with this sentiment.

But I would add one more item to the list: exchange of real-world assets. Most of the value in the world is in goods and services rather than digital currencies. Focusing exclusively on pure digital assets not only wastes human capital — it fundamentally limits people’s vision of what blockchain technology can be used for.

When the ICO craze took off in 2017, almost every company started issuing their own token to cash in on incredible investor demand. BlockApps resisted the trend and turned down what could have been a huge fundraising opportunity because it limited the future potential of our platform to transact in real-world assets. Customers do not want to be forced to buy a speculative asset to pay for goods and services. Looking back, I think we made the right choice.

I’d like to end by expressing my condolences for the customers and investors who lost money in FTX. Amid all the narratives and spin created around this story, the outcome that really matters is the loss experienced by those who lost their hard-earned money to fraud. Apart from a handful of people high up at FTX who knew what was happening, no one involved deserved to lose their money. I wish you all the best, and I hope you are able to recover some of your funds in the years ahead.

[1] A later report by Coin Telegraph on November 9th showed 4 billion dollars worth of FTT had been transferred from a wallet controlled by Alameda to one controlled by FTX, confirming that FTX held a massive amount of FTT collateral from Alameda.